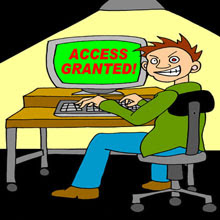 Definition: Someone who breaks into computer systems or networks.
Example: 1) Over the weekend, some hackers attacked MicroSofties's computer network.
Etymology: 'Hacker' comes from the word 'hack', which among computer programmers refers to a clever trick. So a 'hacker' is someone who can use tricks to get into secure computers. But the word 'hack' has another meaning, referring to someone who isn't very good at something. For example, a comedian who isn't very funny can be called a 'hack'.
Postado por Tutor Guilherme às 12/02/2010 07:00:00 AM