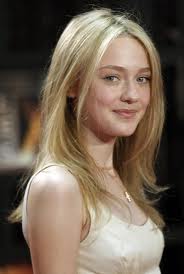 Dakota Fanning is an American actress who was born on February 23rd, 1994, in Conyers, Georgia. She began to act at the age of five, and her first significant acting job was a guest-starring role in the TV series "ER".
After that, Dakota had several guest roles on the other series like "CSI", "The Practice", and "Spin City". In 2001, she auditioned for one of the main characters in "I Am Sam". She was cast, and starred in the movie as Lucy Diamond Dawson, alongside major Hollywood stars Sean Penn and Michelle Pfeiffer. This role made her youngest person ever to be nominated for a Screen Actors Guild Award, as she was seven years old at the time.
Some movies in which Dakota performed: "Uptown Girls", "Push", "Man of Fire", "Hide and Seek", "War of the Worlds", "Dreamer", "The Secret Life of Bees", "Nine Lives", "The Runaways", "Charlote´s Web", "Fragments", "New Moon" and others.
Vocabulary:
role - papel
guest - convidado
auditioned - fez um teste
alongside - ao lado de
nominated - indicada
Postado por Tutor Guilherme às 5/21/2012 07:00:00 AM